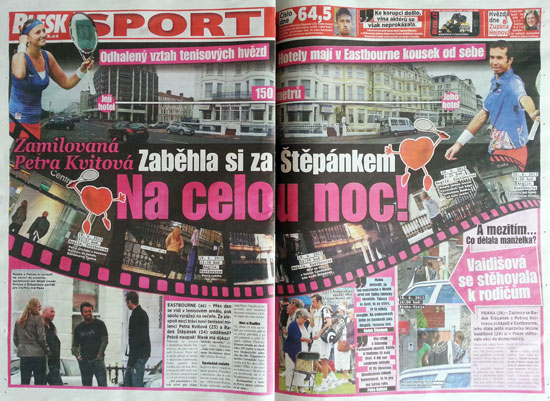 “It’s the tennis exchange of the century,” screamed Blesk on Thursday, introducing a “sensational love story”. And for once they weren’t exaggerating.

Štěpánek — a bit of a ladies’ man despite his Homer Simpsonish looks — married Vaidišová in a flashy ceremony at Prague Castle two years ago. Even Jaromír Jágr was there.

Blesk followed up its initial scoop on Friday, publishing paparazzi shots allegedly showing Kvitová visiting Štěpánek’s hotel in Eastbourne, that notorious city of sin, and not leaving until the morning.

The photos, mostly of the back of Kvitová’s head, aren’t very impressive but seem real enough, and run alongside Štěpánek’s admission that his marriage to Vaidišová effectively ended a couple of weeks ago.

Adding to the intrigue — and potentially turning the triangle into a, er, quadrangle — Kvitová recently broke up with 18-year-old Adam Pavlásek, a rising star of Czech tennis.

Neither Štěpánek nor Kvitová are admitting they’re in a relationship, but PraguePig.com is confident the Czech tabloids will keep us informed of any public displays of affection during Wimbledon fortnight.