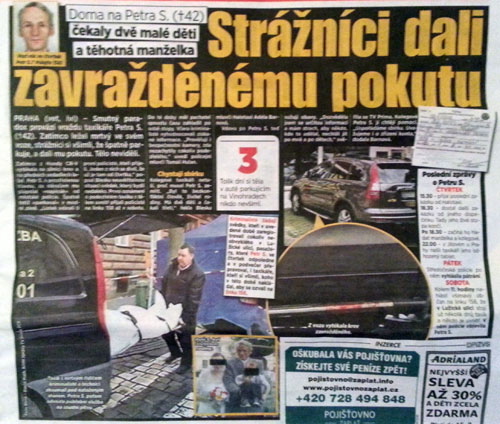 A murdered taxi driver lay dead in his car in Prague 2-Vinohrady for around 36 hours — and was given a parking ticket before his body was discovered.

The mysterious death of Kladno cabbie Petr S. has received widespread coverage in the Czech media since police found his body on Saturday morning (February 1st).

The traffic cop failed to notice the dead body slumped across the front seat or the blood running under the door and onto the street.

A local resident called 158, the police emergency line, on Saturday morning after noticing that the Honda had been illegally parked on Lužická street (not far from the intersection with Šumavská) for some time, and that there appeared to be someone inside.

An autopsy has since confirmed that Petr S. was shot and police are now appealing for witnesses.

The 42-year-old father-of-two accepted his last fare on Thursday evening and was reported missing later that day.

Petr S.’s tablet was found discarded in Jílové u Prahy, a small town 22 kilometres to the south of Prague, later on Thursday night.

The dead man’s colleagues at Halotaxi are organizing a collection for Petr S.’s widow, who is expecting their third child.

• If you have any information related to Petr S.’s death, call 158 (English spoken)