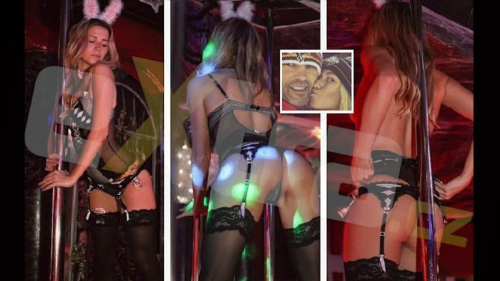 PraguePig.com enjoys looking at photos of the sexy laydeez as much as the next perv but there’s something distinctly icky about the recent tabloid coverage of Veronika Koprivova, hockey god Jaromir Jagr’s girlfriend.

Tabloid news site Extra.cz last week unearthed some old photos of Koprivova, working — shock, horror — at a strip club in Leipzig, alongside the somewhat unlikely claim that “the whole of Germany has seen her breasts”.

The 24-year-old former beauty queen began dating Jagr in February and, until now, her tabloid coverage has been pretty positive.

Jagr is still single at 44 and wanting to see him settle down is something of a Czech national obsession. There was a widespread feeling that Koprivova might be The One.

Since Extra.cz’s scoop, however, it’s been a race to the bottom, with every Czech tabloid outlet rushing to dish new dirt.

More photos emerged, Koprivova’s past was scrutinized in ever-greater detail, and various Czech hockey WAGs weighed in with their own opinions.

As if it were anybody else’s business, Koprivova felt obliged to explain why she’d worked as a stripper in a lengthy Instagram post. (The short version: She needed the money.)

Having your cake and eating it — publishing racy photos and then throwing up your hands in outrage at their contents — is standard tabloid practice, of course. (This website isn’t entirely immune.)

But the hypocrisy of Blesk and its stablemate Aha!, newspapers that routinely publishes Page 3-style photos of topless models, is particularly hard to stomach.

Jagr, for his part, doesn’t seem too upset his girlfriend was a stripper. (Who would be?)

In addition to being an ice-hockey great, #68 is also a self-taught master of social media, and posted the perfect response on Facebook: a video of himself “pole-dancing” around a hockey stick.