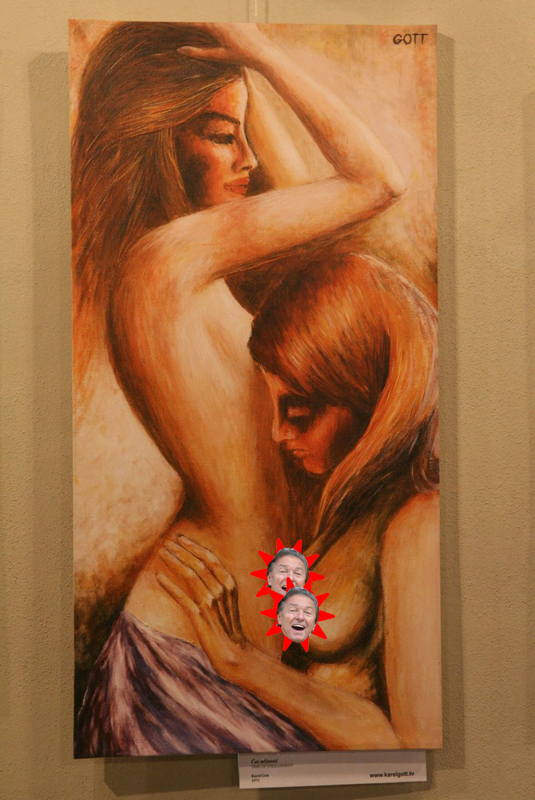 Karel Gott is the world’s greatest singer, of course, but his painting? Well…

PraguePig.com stumbled upon this gem, titled “Cas nezanosti” (“Time of Endearment”), while digging through the archives. (OK, deleting stuff from my phone.)

The original 1973 artwork is part of a collection of more than 40 of the great man’s paintings owned by Zdenek Kohak, a former business partner of Gott’s who was accused of conning Karel out of 8.7 million crowns in 2013. (Kohak vehemently denies the claim.)

According to me, there ´s nothing wrong when two women touch each other. So I painted them in Times of tenderness. This painting caused me a sort of unpleasant experience. On the exhibition in Cologne one young journalist gave me a question, if I was really together with two women at the same time. I said yes, and I liked it a lot. Well, I would not say that it was disgusting, would I? But on the following day, one of the boulevard magazines wrote “Karel Gott likes gruppensex”. Since then, I rather beware of tricky questions of journalists.

Since the closure, in 2009, of the Gottland museum in Jevany, Central Bohemia, the collection has been without a permanent home.

Some of the paintings were also exhibited at the short-lived Gott Gallery Restaurant on Spalena in Prague 1-Nove Mesto, which opened in 2007 but closed a couple of years later.

Now, however, fans can only enjoy the Kohak collection online and at occasional temporary exhibitions.