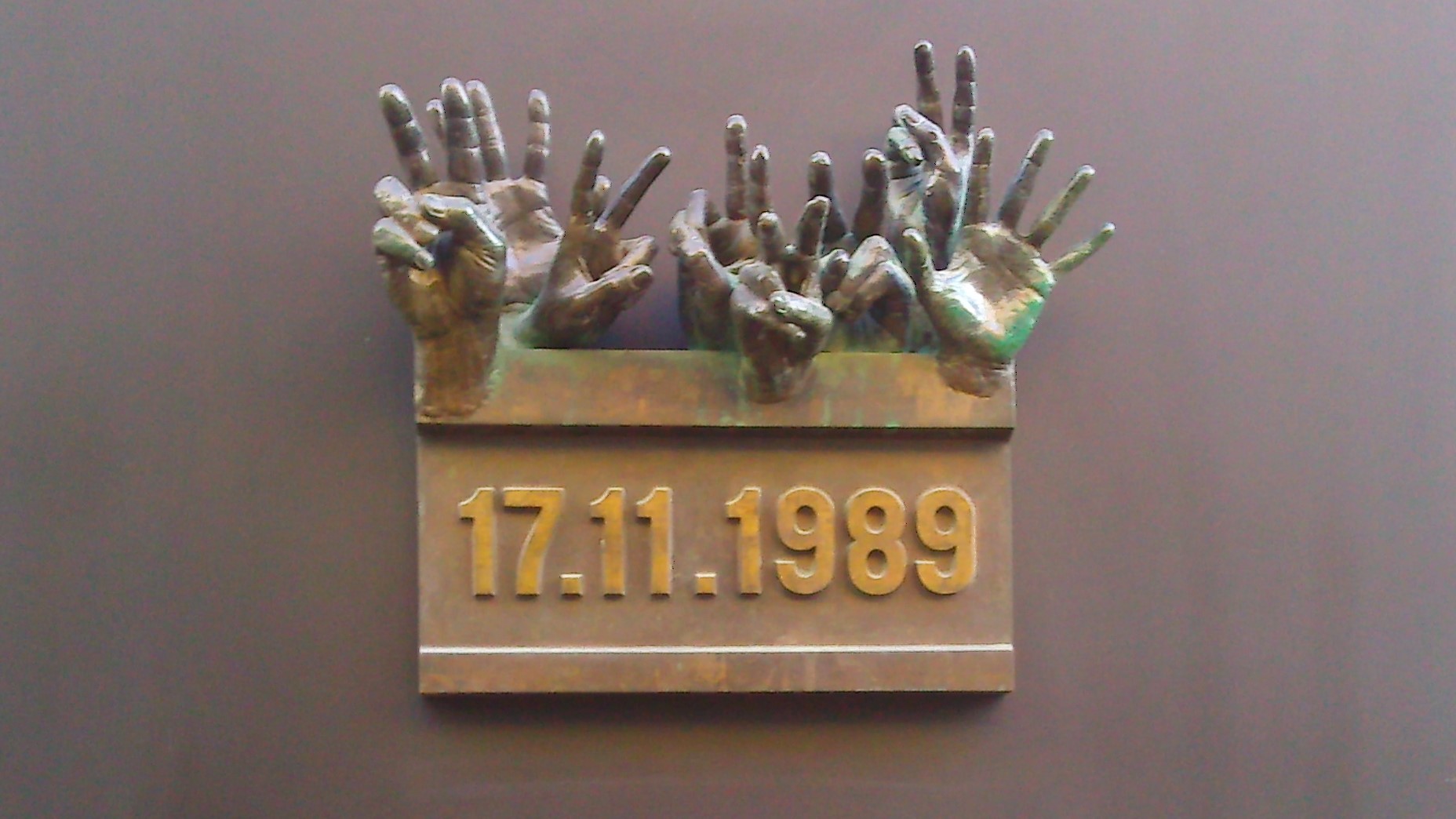 Walking through downtown Prague today it’s hard to believe that the city was, fairly recently, the scene of a revolution involving several hundred thousand people.

If you know where to look, revolution is just around the corner…

The Communist-approved students’ union had organized a demonstration to commemorate the 50th anniversary of a student protest against the Nazi occupation of Czechoslovakia.

Presumably uncomfortable about the parallels between that protest and the current political situation, riot police were sent to stop the students before they reached Wenceslas Square.

When the students refused to disperse a tense stand-off followed. In the spirit of non-violent resistance, some protesters passed flowers to the police.

Suddenly, without warning, the riot police attacked, injuring hundreds of students. Rumors that one student had died later proved to be untrue, but the events of 17 November became known as the Masakr (Massacre).

Today, underneath the arches at the corner of Národní třída and Mikulandská street, a bronze sculpture commemorates the event.

Persistent rumors claim that the events of the Velvet Revolution, including the Masakr, were engineered by KGB agents working for Soviet leader Mikhail Gorbachev.

According to the story, Gorbachev was attempting to force a thaw in the Czechoslovak regime, in line with his own reforms, but that things rapidly got out of hand.

If that story isn’t true, the riot police’s actions were a spectacular misjudgment, gaining mass support for a dissident movement that had previously operated largely in the shadows.

THE BIRTH OF CIVIC FORUM

Hidden away on one of the narrow side streets leading off Wenceslas Square, the Činoherní klub’s shabby looking exterior conceals one of the Czech Republic’s most respected theatres.

The theatre is best known, however, for its key role in the Velvet Revolution.

Following the Masakr, theatres across Czechoslovakia canceled their scheduled performances and instead held public discussions.

Civic Forum, a broad-based group aiming to give a voice to the regime’s opponents was formed here on Sunday, 19 November.

Led by playwright and prominent dissident Vaclav Havel, the group would prove to be the driving force behind the Velvet Revolution.

Civic Forum demanded the resignation of the Communist government, the release of political prisoners of conscience, and an investigation into the 17 November Masakr.

Prague’s main square became the focal point of the Velvet Revolution. From Saturday, 18 November onwards, hundreds of thousands of people took to the square to protest against the Masakr in particular and the regime in general.

Three places on the square have particular significance:

The statue of St. Wenceslas at the top of the square, near the National Museum, is a traditional gathering place. Throughout the two weeks that toppled communism, the monument was decorated with flags, posters and political slogans.

Memorial to the Victims of Communism

During the Velvet Revolution, protesters turned an area just below the Wenceslas Monument into a shrine to the victims of the communist regime.

Today, there is a permanent memorial to the victims of Communism, featuring photos of Palach and Zajíc.

The building that once housed the Melantrich publishing house and the Socialist Party newspaper, Svobodné slovo, provided a vantage point from which Vaclav Havel and other dissident leaders could address the crowds on Wenceslas Square. (The building now houses a branch of Marks & Spencer.)

It was here, for instance, that Alexandr Dubček, architect of 1968’s reformist Prague Spring, emerged from decades of enforced obscurity to appear alongside Havel.

THE CENTRE OF OPERATIONS

After forming at the Činoherní klub, Civic Forum made another theatre their home.

The Laterna magika (Magic Lantern), housed in the basement of the attractive Palác Adria building, became the movement’s center of operations during the hectic two weeks leading up to the fall of Communism.

THE BEGINNING OF THE END

Civic Forum presented Adamec with a list of demands that were approved by the Communist parliament on 29 November, in the ugly modernist building at the top of Wenceslas Square that now houses Radio Free Europe/Radio Liberty.

It was the beginning of the end for the Communist regime, and on 11 December, Václav Havel was named President of Czechoslovakia.