Every now and then, PraguePig.com comes across a Czech-language comment on Facebook so offensive, I feel the need to report it.

And more often than not, Facebook will reject my complaint, usually along the lines of, “We’ve looked over the comment, and although it doesn’t go against any of our specific Community Standards, we understand that it may still be offensive to you and others…”

I began to wonder how Facey goes about monitoring this stuff. Does it have a team in the Czech Republic? And if so, how does it work?

Beyond the publicly available Community Standards, the internal processes which Facebook uses to review potential hate speech are, as I came to find out, a closely guarded secret.

My first clues were a couple of articles by Till Krause and Hannes Grassegger on German newspaper Süddeutsche Zeitung’s (SZ’s) English-language website: Inside Facebook and Facebook’s secret rules of deletion

According to SZ, a large part of Facebook’s hate-speech monitoring is carried out in Berlin by a company called Arvato.

I contacted Arvato and asked whether they are responsible for monitoring Czech-language content and received the following reply from Gernot Wolf, their Head of Communications Services Divisions:

Arvato does not provide or has ever provided Facebook with [vetting of Czech-language hate speech].

I’d tried repeatedly to contact Facebook’s press department through their Newsroom website. I even enlisted the help of a friend of a friend who worked at Facebook to try to hurry the process along, but still got no reply to my questions.

Finally, however, I received the following statement from a Facebook spokesperson based in Poland:

People come together on Facebook to share their stories, connect with friends and to raise awareness about issues that are important to them. Conversations that happen on Facebook reflect the diversity of a community of over 4.7 million people in Czech Republic and many more globally. We are a highly self-regulating platform, and people can and often do report content that they believe breaches our Community Standards. Those are the rules that apply to the Facebook community across borders, countries, languages and cultures. Each report is routed through to our Community Operations team of hundreds of highly trained experts that provides 24/7 cover across the globe, including Czech language specialists that review Czech content. Typically, for Czech, this is handled by our team in Dublin.

Sure enough, Facebook did seem to be hiring people in Dublin for a wide range of language-specific “Community Operations” jobs.

All that remained was to put Facebook’s team of Dublin-based Czech-speakers to the test, by reporting a few obviously offensive comments and seeing what happened.

Parlamentní listy, sometimes described as the “Czech Breitbart”, proved to be a reliable source of hate. The steady stream of anti-immigrant stories on its Facebook page frequently received comments that seemed to breach Facebook’s Community Standards, so I started reporting some of them. 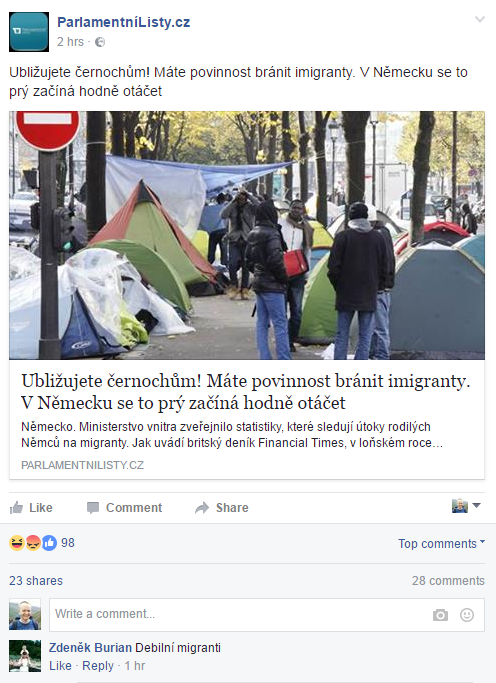 Facebook opted not to remove this comment, on a story about a United Nations report accusing Germany of institutional racism against people of African origin. SZ offers a possible explanation:

Comment: “Islám je náboženství pro debily, proto taky je vidět, co je to za debilní lidoopy. Nikdo aspoň s průměrným IQ nemůže na něco tak debilního věřit. A pokud začnou vládnout lidoopi je jedno jestli budou teroristé nebo ne” (Link)
Translation: “Islam is a religion for retards, so you can see how it is for these retarded apes. Nobody with at least average IQ can believe in something so retarded. And if the apes take charge, it doesn’t matter whether they’re terrorists or not”

The second comment I reported to Facebook appears beneath a link to an article about a Pew Research Center report that predicts that Islam will be the world’s biggest religion by 2050.

SZ notes that “while members of religious groups are protected, religion itself is not” but that doesn’t explain why the poster is allowed to describe Muslims as “retarded apes”. Was this comment permitted in error, perhaps?

The third reported comment appeared below the same article as Robert S.’s comment and, in PraguePig.com’s view, was the most ambiguous of the three.

Surprisingly, however, it was the only one to actually be removed. Presumably, Facebook judged that “dead slug” definitely referred to a Muslim. Bizarrely, however, the same user’s illustration of a pig shagging an imam up the arse, wasn’t removed.

This wasn’t, of course, a comprehensive survey but I hope it gives some insight into Facebook’s hate-speech review processes (or the lack of them).

I’d also like to hear your experiences, either in the comments below or, if you’d prefer to share them privately, via email: praguepig@gmail.com

The announcement, made shortly before this article was published, that Facebook plans to hire 3,000 more content moderators can only be good news.

Until the company is more transparent about its content-review process, however, it’s hard to say whether this will have any impact on the amount of Czech-language hate speech slipping through the net.