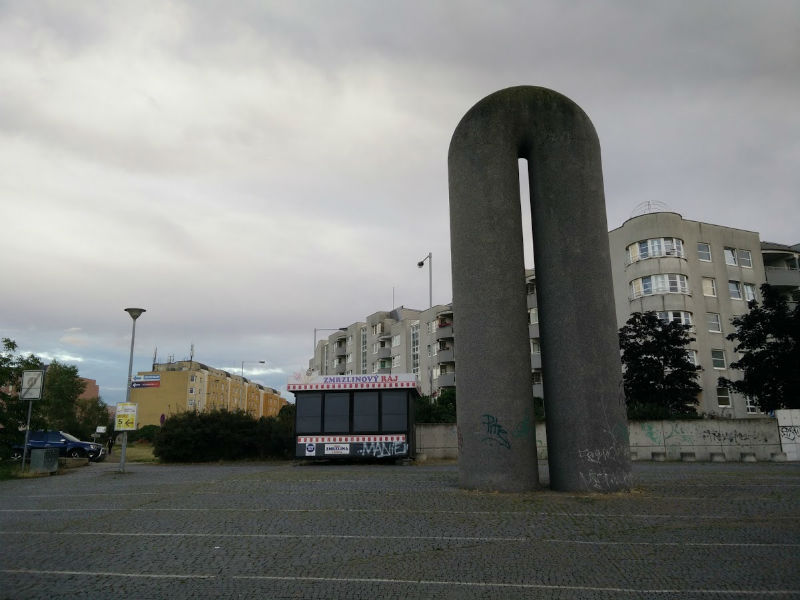 Prague 20-Cerny Most. All photos by Thelma Buswicke except 12 (Mrs. PraguePig.com).

Living in Sidliste Bohnice and working in Chodov, PraguePig.com gets a bit tired of articles like the Huffington Post’s 10 Dazzling Photos That Are Proof Prague Is Europe’s Prettiest City.

Sure, parts of Prague are beautiful but heavily Photoshopped spire-porn doesn’t tell the whole story. Away from the centre, things get a little greyer and a little grimier.

Here’s PraguePig.com’s tribute to the more tarnished parts of the Golden City. 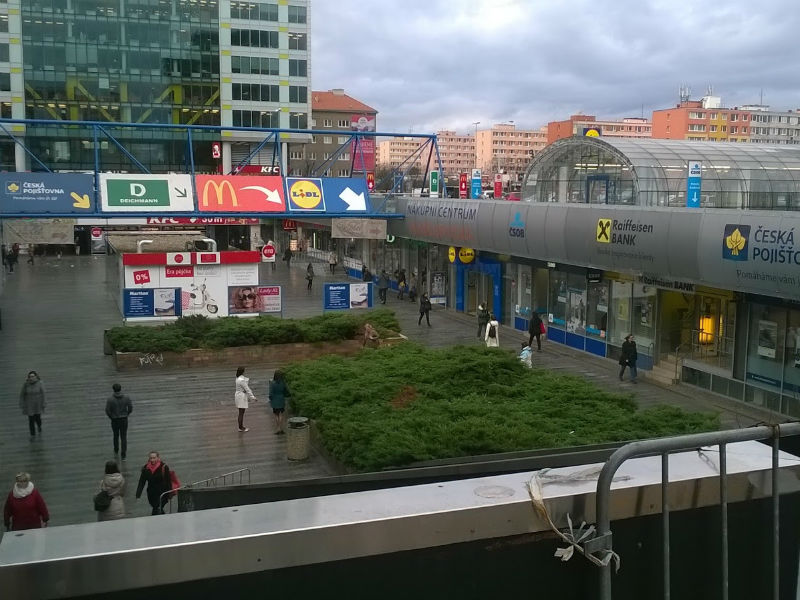 Overshadowed by the much grander DBK mall, the drab concrete shopping precinct above Budejovicka metro station remains defiantly ugly despite encroaching gentrification. Given the Commie-era look-and-feel of the place, it’s surprising to discover that NCB only dates back to 1991, a couple of years after the revolution. The precinct’s 10th anniversary was marked by this spectacularly retro website. 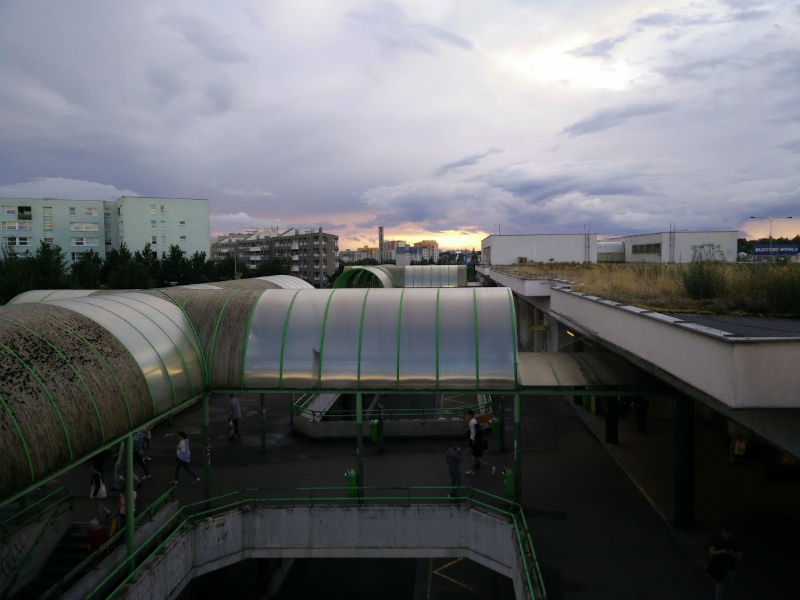 This important transport interchange at the east end of the yellow (B) line welcomes the weary traveller to Prague with a fanfare of plastic sheeting and pigeon shit. The Cerny Most housing estate (sidliste) is reportedly the worst in the city but PraguePig.com found it surprisingly pleasant on a recent visit. Only the areas around the metro station looked genuinely grotty. 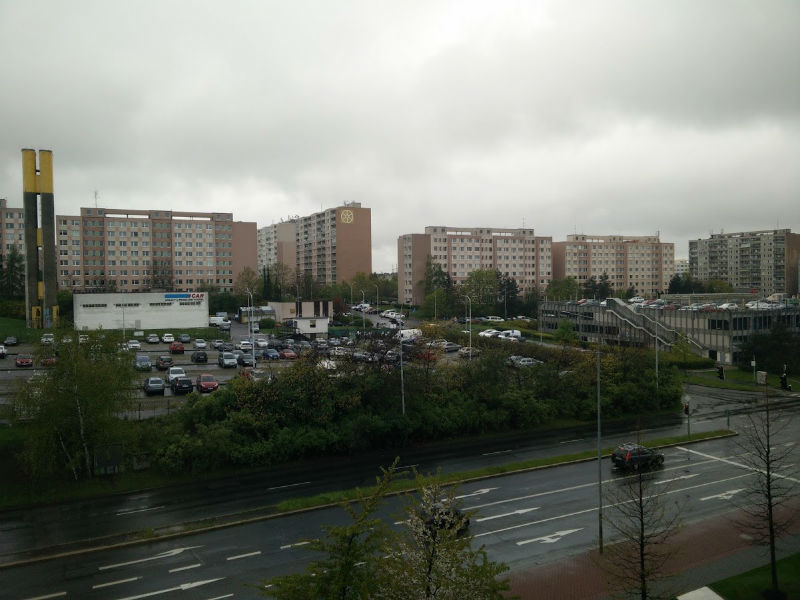 Spread across most of Prague 11 and a bit of Prague 4, Jizni Mesto (“Southern City”) is the country’s largest Communist-era housing development, and currently accommodates around 75,000 people. This photo, showing the Sidliste Chodov estate in all its glory, was taken from the non-descript office park where PraguePig.com does his day job. 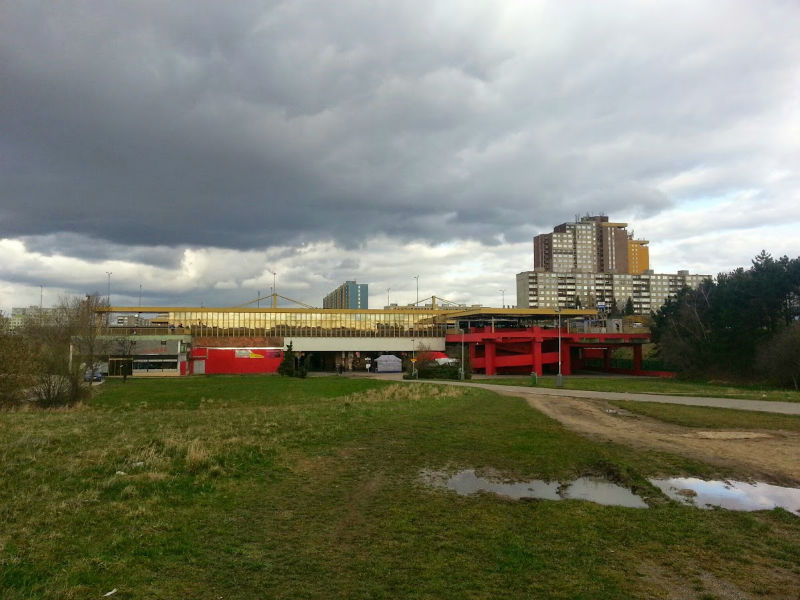 Travelling one stop down the red (C) line reveals the splendour of Opatov metro station, which — like much Communist-era architecture — features as many winding concrete walkways and places for discreet public urination as possible. Originally known as Druzby (“Friendship”), Opatov stands at the opposite end of the imaginatively named Centralni park (originally Park ceskoslovensko-sovetskeho pratelstvi (“Park of Czechoslovak-Soviet Friendship”)) from… 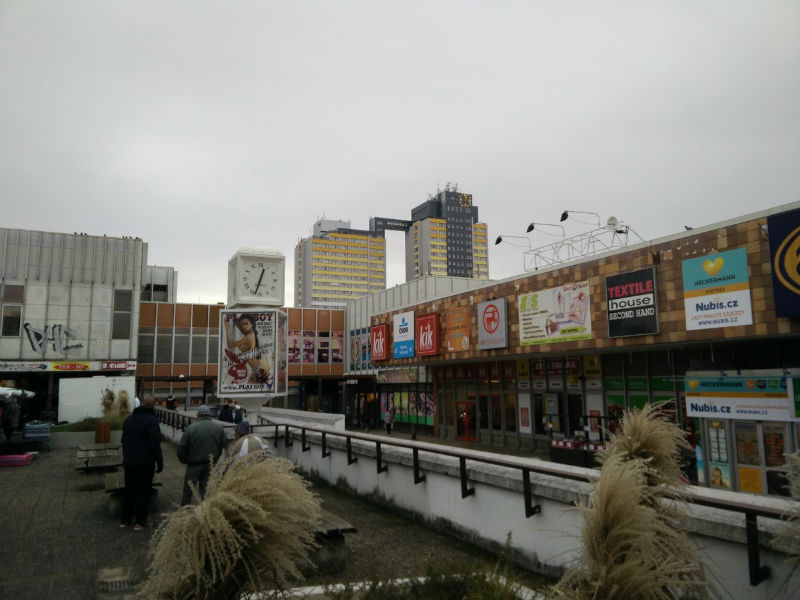 The conjoined towers of Ubytovna Kupa (aka the “Prazska dvojcata” (“Prague Twins”)) loom large over the Haje metro station shopping precinct. Built in 1980, as accommodation for state employees, Kupa was once the country’s highest building, and remains the country’s tallest panelak (panel building). These days, it’s used as accommodation for cops. There’s a restaurant on the top floor. 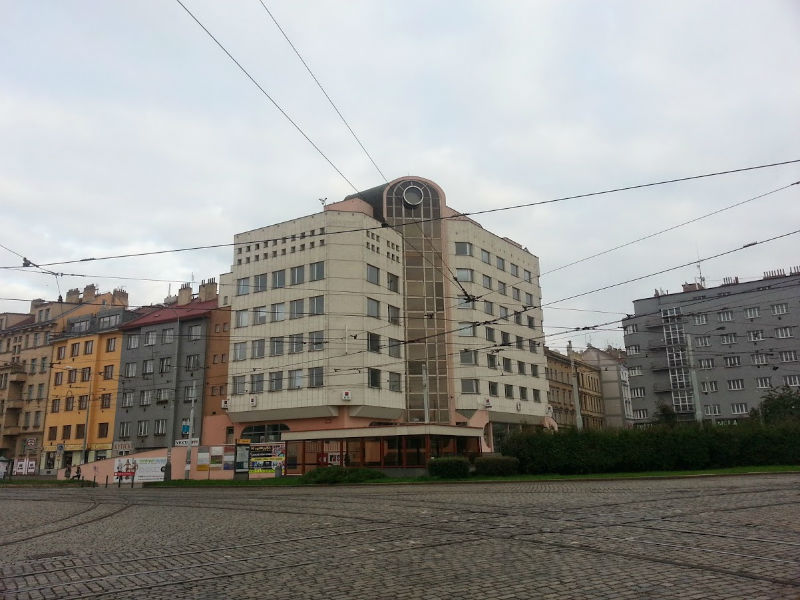 A curious blend of faded grandeur and crummy Communist-era buildings, Liben was officially designated an “area of social exclusion,” (i.e., ghetto) in 2006 but thanks to good transport connections and the close proximity of oh-so-bloody-trendy Karlin, is now a prime candidate for Andel-style gentrification. This photo shows the hideous 1987 Komercni banka building at the corner of Zenklova and Na Zertvach. 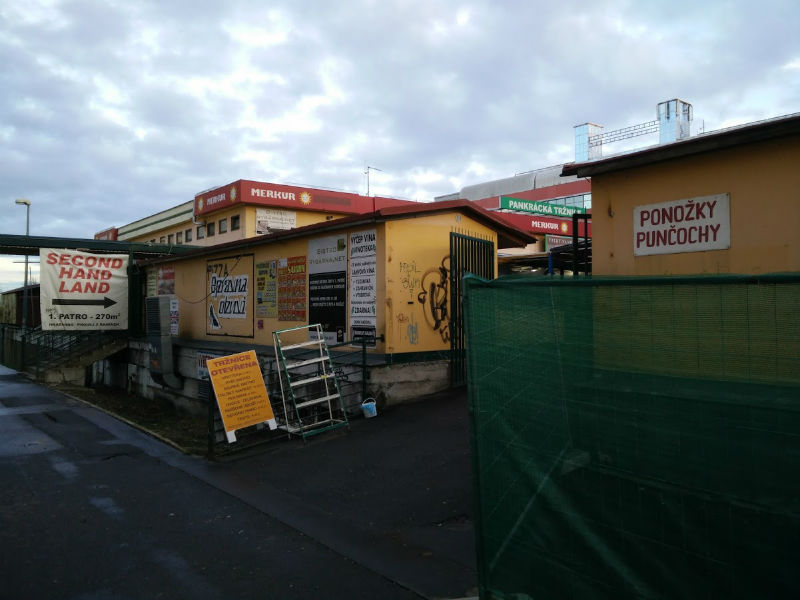 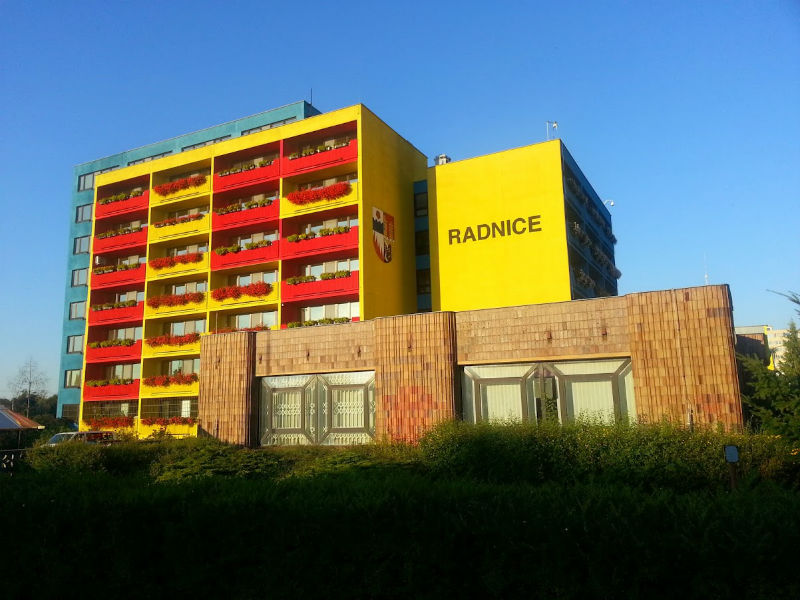 It’s a bit of a trek out to Horni Mecholupy but the district town hall — a converted panelak painted in Lego-like primary colours — makes it well worth the effort. Thrill-seekers, take note: the nearest bus stop is Bolonska. 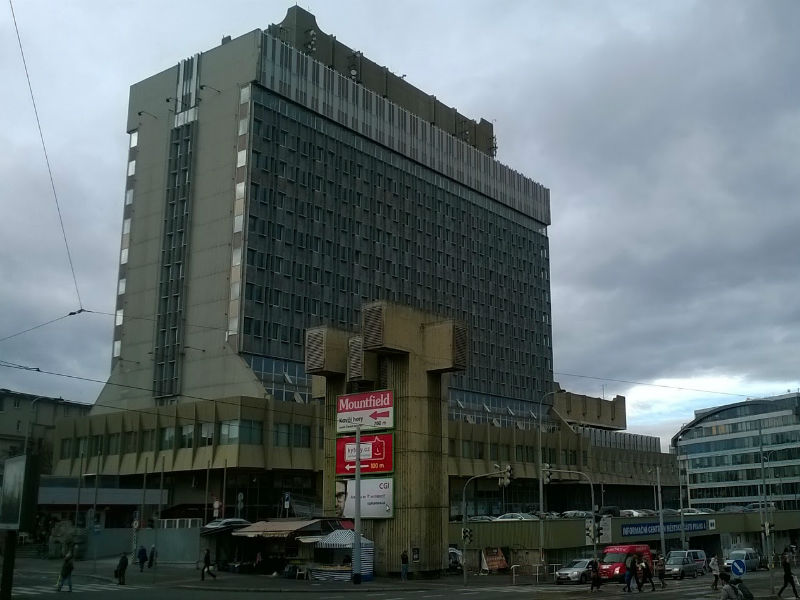 A metro ride to Prazskeho Povstani is a must for connoisseurs of bad Prague architecture. Divided by a major highway and laid out with little apparent concern for humanity, “The Square of Heroes” is a treasure trove of depressing buildings, ranging from the drab First Republic-era courts to the monstrous post-modern CSOB bank building. This photo shows Budova Centrotex, a chunky slab of concrete from 1969. 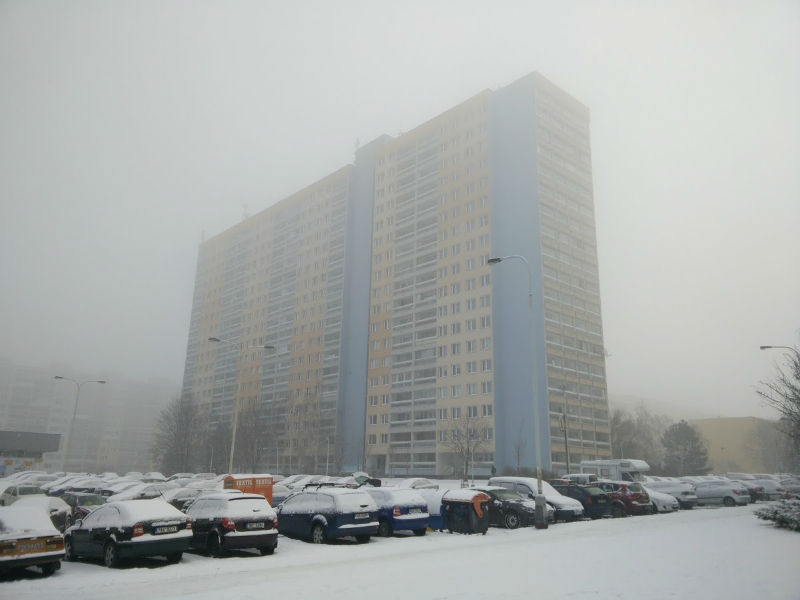 It’s an acquired taste but PraguePig.com loves the housing estate he calls home. Part of the 1970s Severni Mesto (“Northern City”) development, Sidliste Bohnice might look like a dystopian hellhole but because Prague’s Communist-era estates were never designed as housing for poor people, life here is surprisingly genteel — more suburb-in-the-sky than sink estate. 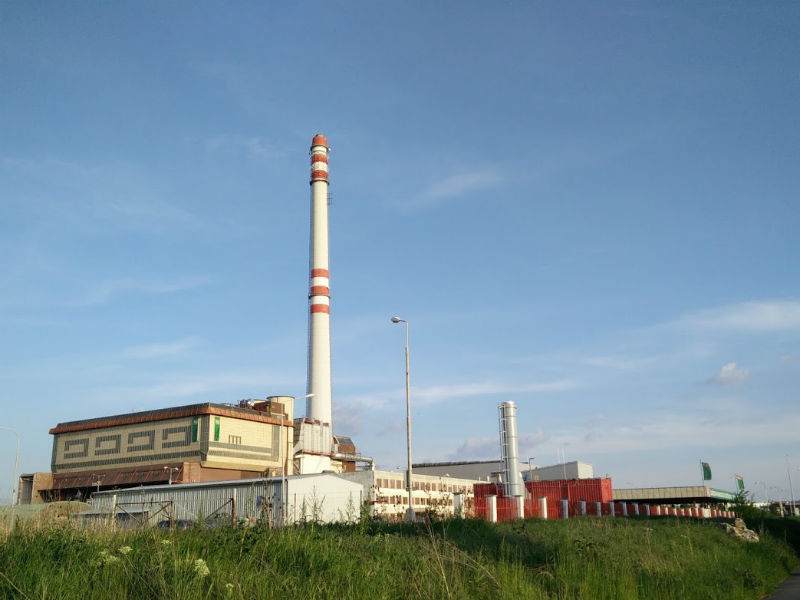 Incineration plants are rarely lovely but there’s something breathtakingly uncompromising about Spalovna Malesice, a building that looks like it was designed for a particularly bleak Terry Gilliam movie. Fans of incineration will be pleased to know that Playtvak.cz streams live video of the inside of the facility, under the title Brany pekelne (“The Gates of Hell”). 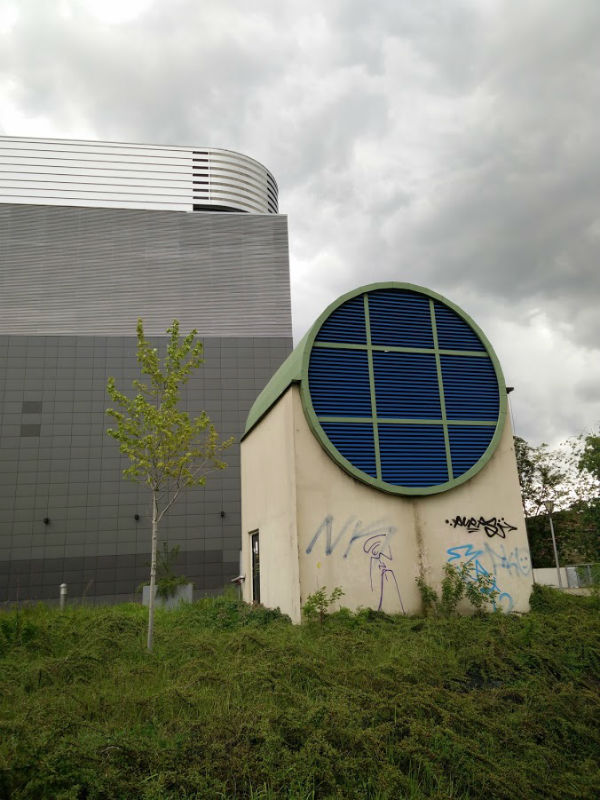 Heavy industry has given way to humdrum homogeneity in Vysocany, which is probably an improvement for the locals but doesn’t make it any more attractive as a destination. This photo was taken next to the Clarion Congress Hotel Prague, a four-star conference centre with possibly the least exciting location in the city.

• Is your favourite ugly building missing from the list? Let PraguePig.com know in the comments.