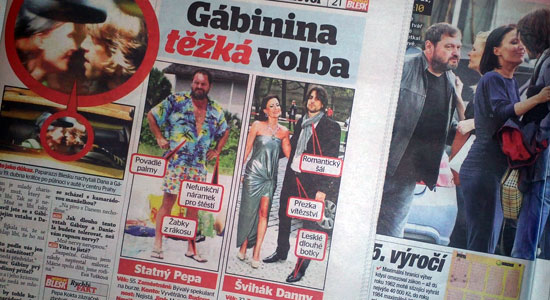 Up to 120,000 people demonstrated against the government in Prague on Saturday but that wasn’t enough to keep Gábina Partyšová off the front pages of both Blesk’s and Aha!’s Sunday editions.

The cause of this tabloid feeding frenzy is the apparently precarious state of the 33-year-old TV presenter/singer/glamour model’s 10-year-old marriage to Josef “Pepa” Kokta, a 55-year-old “former market speculator”.

Partyšová’s decision to take 32-year-old photographer Daniel Zahrádka to last weekend’s TýTý awards ceremony, rather than her husband, has inevitably led to speculation that Gábina — who presents Prima’s Top Star Magazín show and also has a pop career under the name Gabriela — is having an affair with Zahrádka, despite her describing him as a “family friend”.

Under the headline “Husband Face to Face With ‘Lover”, today’s Aha! features photos of Partyšová, Kokta, Zahrádka and Zahrádka’s wife taken in the car park of Soho, a fancy sushi restaurant in Prague 4-Podolí.

In an interview with Blesk, meanwhile, Kokta, says he doesn’t regard extramarital sex as being unfaithful, that he isn’t considering divorce and that he’s still in love with his wife.

Blesk helpfully runs a box alongside this interview, headlined “Gabina’s Difficult Choice”, contrasting photographs of “Sturdy Pepa” — dressed in a Hawaiian shirt, beach shorts and flip-flops — and “Dude Danny” — wearing a “romantic scarf” and “long, shiny boots” and with his “belt buckle of victory” highlighted — and invites readers to vote for which one they’d choose.

One thing about this story strikes me as odd, though: Is it at all significant that much of this speculation also features in the press section of Partyšová’s official website?