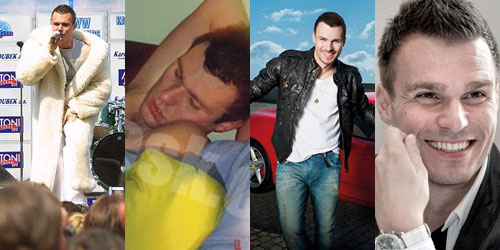 Good looks and easy charm have made Leoš Mareš a star, but it’s the radio and TV presenter’s colourful social life that fascinates the Czech Republic’s tabloid media.

His post-Christmas split with girlfriend Petra Faltýnová, a silicone-enhanced model, is already one of the big tabloid stories of 2014, but there’s rarely a time when Mareš is out of the headlines.

When there’s no womanizing or boozing to write about, it’s Leoš’s extravagant lifestyle — fast cars, designer labels, expensive gadgets — that keep him in the news.

An aspirational role model, Mareš’s story is the classic tale of the boy from nowhere who makes it to the top — in this case, thanks to a combination of talent and media savvy.

Mareš, for instance, was one of only two presenters to figure in Forbes magazine’s “50 Most Influential People in Czech Media” list earlier this month.

The 38-year-old’s showy lifestyle and mainstream ubiquity have made him an easy target for detractors.

In a country where the rich tend to hide their wealth away, however, PraguePig.com thinks his extravagance is a breath of fresh air.

Here’s 15 things you should know about Leoš Mareš:

2. Mareš got his big break in 1994, at the beginning of his first year at Cheb’s economics university (FEK ZČU), when he won a competition organized by local station Radio Ergensis. The 18-year-old student was immediately offered Ergensis’s midnight-to-6am show.

When Leoš graduated, in 1997, he was offered the breakfast show on one of the Czech Republic’s most popular national radio stations, Evropa 2. (Mareš continues to co-host Evropa 2’s breakfast show, with sidekick Patrik Hezucký, today.)

3. Mareš launched a pop career in 2001, dealing mainly in lightweight pop-rap. To date, he has released three studio albums and two compilations, the most recent of them in 2008. Here’s his debut single, “Lži jsou jako déšť” (“Lies Are Like Rain”):

4. During his time as a pop star, Mareš’s taste for full-length fur coats earned him the nickname Pán kožichů (“Lord of the Furs”).

5. Mareš’s TV career began in earnest in 2005, when he presented the Czech version of Big Brother on TV Nova. He went on to hosted two more Nova reality shows — the Czech versions of Pop Idol (Česko hledá Superstar) and X Factor.

When his three-year contract with Nova wasn’t renewed, Mareš switched to Prima last year (2013), serving as one of the judges on the Czech-Slovak version of Britain’s Got Talent (Česko Slovensko má talent) and launching a short-lived Czech version of the UK panel game QI.

Mareš is set to return to Nova this year, hosting the Czech-Slovak version of The Voice (Hlas ČeskoSlovenska).

7. In May 2008, two months before he married Monika, Blesk published photographs of Mareš having sex with prostitutes in a flat in Prague 5-Nové Butovice.

“They must have drugged him, otherwise it’s impossible,” Monika told the newspaper at the time.

After several reported affairs, Leoš and Monika split up in February 2010.

8. In November 2010, Mareš got into a fight with Petr Dzingel — at that time the producer of his Evropa 2 show.

According to anonymous onlookers quoted in Blesk, a visibly drunk Mareš spat in Dzingel’s face and, once his producer was on the ground, kicked him in the head, yelling, “Do you know how much I earn? 100,000 [crowns] a day!”

Mareš was later given an 18-month suspended sentence.

9. In January 2011, Mareš turned up drunk for his Evropa 2 breakfast show. It wasn’t pretty:

10. Mareš’s weakness for fast cars has been well documented.

The clip was later revealed to be a hoax, produced as part of a viral campaign for a domain-name registrar.

11. A character called Leoš Mareš features in the Czech edition of the video game Call of Duty: Modern Warfare 3.

A year later, Mareš and Štekl got into a scrap in Kozička, an Old Town bar popular with Czech celebs.

Faltýnová, who has a daughter with Štekl, had previously had a well-publicised affair with actor Jiří Langmajer.

13. A Mareš/Faltýnová “sex tape” was shopped around various tabloid publications in the spring of last year (2013), after Mareš’s mobile phone was stolen. To the red tops’ credit, there were no buyers.

14. According to Forbes, around 80% of Mareš’s considerable income comes from doing private functions rather than from his media work.

15. Mareš and Faltýnová spent December 23rd together, according to Mareš’s ex-wife Monika, but went on separate holidays after Christmas — him to Thailand; her to Miami.

Blesk broke the momentous news of their break-up on January 3rd.

The big question now is what they’ll do about their matching tattoos.