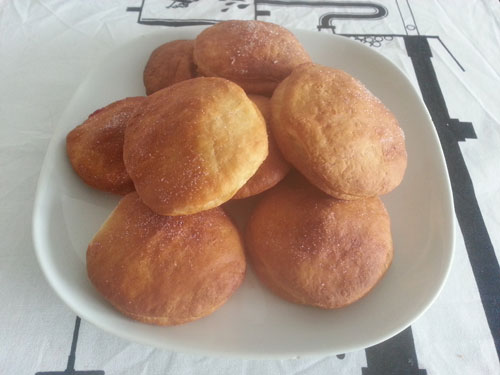 “Levně a chutně” is one of the most entertaining features on TV Nova’s early-evening news show.

Here, he cooks up budget versions of Czech and international favourites.

The recipes are undeniably “cheap” — chicken skins seem to feature prominently — but are they “tasty”?

PraguePig.com decided to find out, starting with a recipe for oven-baked doughnuts.

Measurements
On my fiancée’s advice, I used a 0.3-litre coffee mug as the “cup” (“hrnek”).

Shopping
Pretty easy. I found all the ingredients in the Albert hypermarket in Prague 4-Chodov but it took a couple of attempts to find the yeast. (It was in the refrigerated section next to the fresh milk rather than with the rest of the baking products.) The rum probably isn’t essential but we had some tuzemák left over from Christmas so I used that.

Method
1. Mix all the ingredients except the rum and a teaspoon of the butter and form it into a dough with your hands.

3. Roll out the dough using a rolling pin then use a drinking glass to cut the dough into circles.

4. For each doughnut, place a teaspoon of jam on one of the dough circles and cover it with another circle. (It’s what Bob Marley would have wanted.) Seal the edges with your fingers.

5. Place the uncooked doughnuts on a baking tray lined with baking paper and leave for another 20 minutes.

7. Melt the spare teaspoon of butter in a pan and add the rum.

8. Remove the doughnuts from the oven and brush each one with the butter/rum mix.

Verdict: NOT RECOMMENDED
For some reason, the dough didn’t rise as it should have done, and what came out of the oven resembled golden-brown ice hockey pucks. The doughnuts were a little bit softer after we left them overnight but I still wouldn’t recommend them. At least somebody liked them, though: 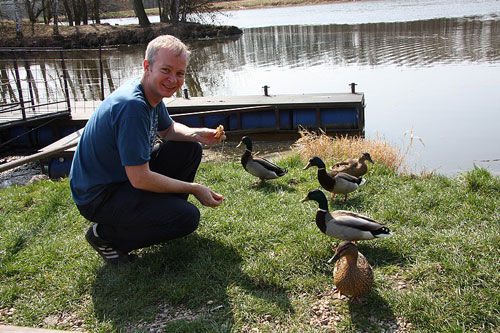