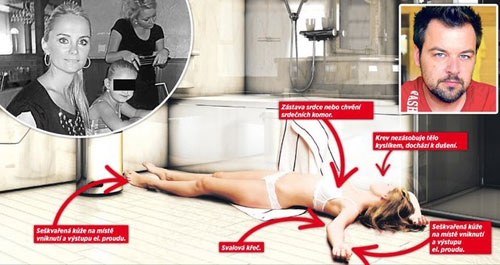 There have been some dramatic developments in the Monika and Klára Kramná investigation — and not just the ones dreamt up by Blesk’s anonymous sources.

Perhaps the biggest surprise came on March 8th, however, when Czech investigator Milan Pospíšek told Prima’s Krimi zprávy show that Monika and Klára weren’t poisoned, as had been widely reported.

Two days later, a “reliable” (but anonymous) source eleborated on this unexpected development, telling Mladá fronta Dnes that the cops now think Kramný may have electrocuted his wife by dropping an electrical appliance into her bath.

Meanwhile, Kramný, who denies all wrongdoing, had been undergoing long hours of questioning in custody and, according to Blesk, had suffered a “mental collapse”.

Finally, on March 13th, TV Nova broadcast a recording Kramný had made, supposedly one week after Monika’s and Klára’s deaths, in which he describes how he discovered that his wife had spent hours on Facebook flirting with men.

According to Kramný, Monika’s had set her relationship status as single and her Facebook friends included 57 men he didn’t recognize.

After an argument, Kramný says he cancelled his wife’s account.

No date has yet been set for Kramný’s trial.