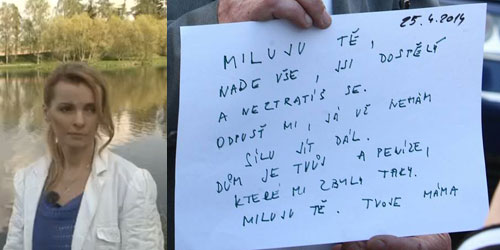 The queen of the Czech tabloids is dead.

Later that day, her husband Josef Rychtář confirmed that the 48-year-old pop star had committed suicide.

As sad as it is, Bartošová’s death hardly comes as a surprise.

Iveta had battled alcoholism and mental health problems for several years and after apparently getting her life in order late last year, began to show alarming signs of a relapse last month.

On April 8th, Blesk reported that Bartošová had cancelled several concerts and, two days later, noted with concern that she hadn’t been seen in public for three days — an unusually long time for the normally media-friendly singer.

Presumably designed to convince people that everything was OK, the interview had the opposite effect.

Frail, inarticulate, and generally spaced out, her appearance alarmed viewers, and prompted at least one medical expert to urge Iveta to seek immediate medical help.

Six days later, she was dead, apparently having left a suicide note under her son Artur’s bed.

Like everything else in her life, the circumstances leading up to Iveta Bartošová’s death have become tabloid fodder.

Was her suicide planned in advance?

Was the timing significant? (April 29th is Rychtář’s birthday.)

Did her death deliberately echo that of first love Petr Sepéši? (The singer was hit by a train at a level crossing in 1985.)

Why did Rychtář do nothing to help Iveta after he found the suicide note?

Even after her death, there’s little sign of the tragicomic Iveta Bartošová circus — a perfect tabloid storm that combines elements of the Princess Diana, Amy Winehouse and Paul “Gazza” Gascoigne stories — running out of steam.

And the bitter row over the arrangements for Iveta’s funeral (Rychtář wants a big affair; nobody else does) continues to take up column inches.

For all the wrong reasons, this isn’t the last we’ve heard of Iveta Bartošová.