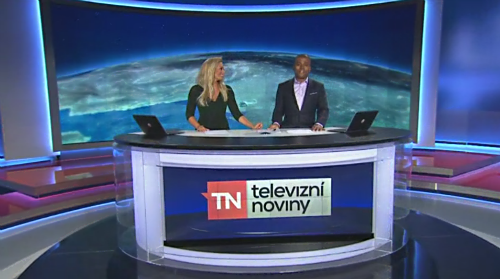 Shown nightly at 7:30pm, TN is a 50-minute-long mishmash of horror, outrage, sentimentality, and the kind of “news” that, in a larger country, would only just qualify as village gossip. PraguePig.com loves it.

In the absence of too many earth-shattering events, Nova sticks to a tried-and-tested formula so predictable that PraguePig.com thought it would be ideal fodder for a drinking game.

THE RULES
Yell “drink!” every time you see or hear the following. Whoever shouts first, gets to sit out the round.

(But please stick to beer or wine if you do actually play. This stuff shows up with such regularity that you’ll probably end up in the hospital if you drink anything stronger.)

TN’s first-choice presenters, Reynolds “Rey” Koranteng & Lucie Boryhova: one sip
• Bonus: one extra sip if Rey is wearing a shirt without a tie

Death on the roads: one sip
(Car accidents are an obsession for Nova, even though death rates here aren’t dramatically different from those in Central Europe’s other former Communist countries.)

Cute zoo story: one sip
(PraguePig.com can’t remember seeing an edition of TN that didn’t feature a trip to a zoo or safari park.)

Cruelty to animals: one sip
(Guaranteed to feature the sad music mentioned above.)

Shameless plug for a new film Nova is co-financing: one sip

Shoddy goods on sale at a Vietnamese market: one sip

An interview with security expert Andor Sandor, just because he has a cool name: one sip