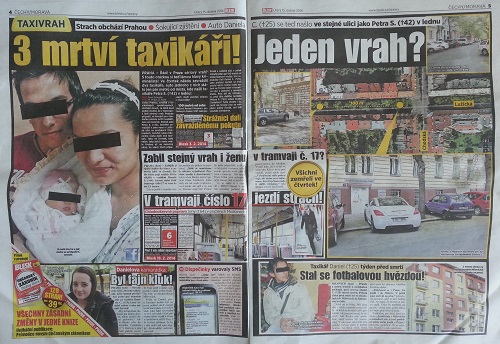 A serial killer is stalking the streets of Prague, preying on taxi drivers and possibly even old women on trams.

The two drivers each apparently picked up fares in Prague the previous evening. They were then instructed to drive to a remote area of Uhříněves and their bodies later found dumped nearby with gunshot wounds to the head.

(Daniel C.’s youthful appearance initially led to media reports that the bodies of a boy and man had been found.)

Blesk thinks the killings could be linked to the shooting of taxi driver Petr S. in January, who was found shot dead on Lužicka street in Prague 2-Vinohrady.

Petr S.’s profession isn’t the only connection between the two cases, Blesk points out.

Daniel C.’s Renault Megane was discovered on Lužicka, only around a hundred metres from the spot were Petr S.’s body was found.

And all three taxi drivers also died after picking up fares on a Thursday.

More speculatively, Blesk wonders whether the same killer could have been responsible for the apparently senseless killing of 64-year-old Danuše S., who was discovered shot dead on a number 17 tram on February 13th — also a Thursday.

Police spokeswoman Hana Jeřábková refused to be drawn on Blesk’s far-fetched theory, however, telling the tabloid that the police were currently unable to comment and asking the media for patience and understanding.